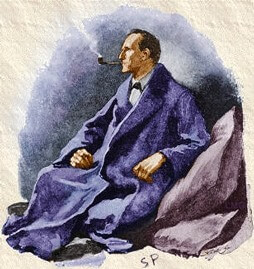 Sherlock Holmes, would murder mystery dinners have ever happened?
Probably not. The brilliant mind. The clarity and beauty of his crime solving. The deerstalker and pipe (branding before there was branding). The cocaine. Well, maybe not the cocaine…

The world’s greatest fictional detective appears in several of our murder mysteries. And you don’t have to visit Baker Street to meet him. We’ll bring him to wherever your event is happening or arrange the venue for you.

To read 24 of the Sherlock stories online or to print them out, they are available free here. We love all of them. If we were only allowed ever to read one,  The Red-Headed League would probably be it.

Our Sherlock’s First Case plot includes many characters whom Sherlockians will recognise: posh Victorian gentlefolk who are never all they seem, people in high positions with terrible secrets to hide, wickednesses committed irrespective of class, breeding or education. A shocking crime occurs. Sherlock Holmes is tasked with investigating it and seeks help from those around him (yourselves). Solving it is fun as well as being a challenge and an adventure. To succeed, you’ll need to assess the evidence and clues, question the suspects and bring some Holmesian logic to bear on everything before you. The plot is available in two forms: Very Participative and Fairly Participative.

Our Death By Numbers plot was created especially for a group of keen Sherlock Holmes devotees. It is Watch The Action in style. Short scenes are performed between breaks. Suspects are cross examined by Sherlock in front of everyone. Some of those suspects are guests. Are they a match for Sherlock? It is more than improbable. It is impossible…

“The lowest and vilest alleys in London do not present a more dreadful record of sin than does the smiling and beautiful countryside.”
From The Adventure of the Copper Beeches

“I assure you that the most winning woman I ever knew was hanged for poisoning three little children for their insurance money, and the most repellent man of my acquaintance is a philanthropist who has spent nearly a quarter of a million upon the London poor.”
Sherlock Holmes, The Sign of Four

“I never can resist a touch of the dramatic.”
Sherlock Holmes, The Naval Treaty